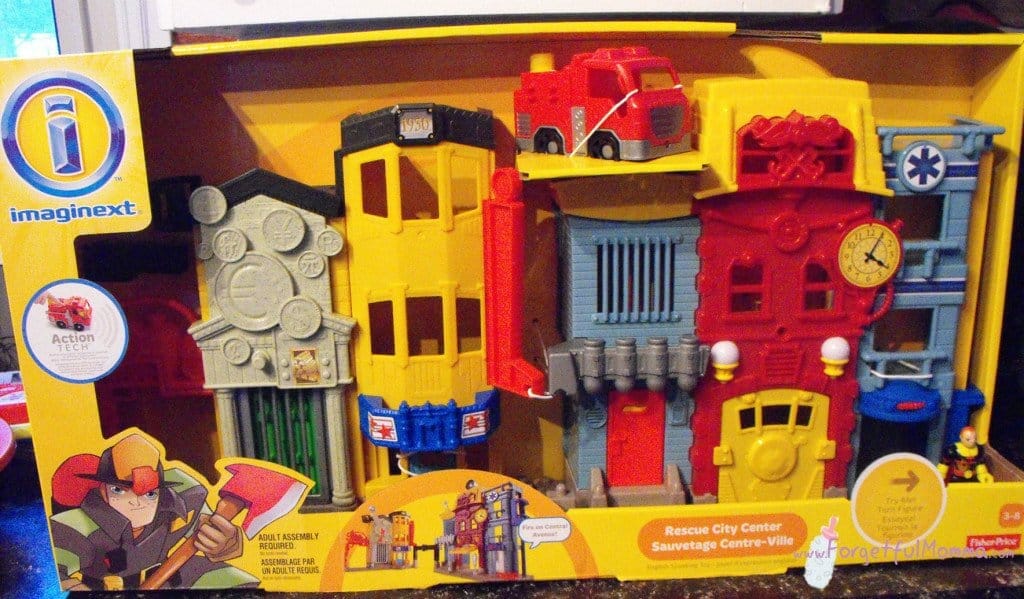 Doesn’t this look rather cool? Hubby put it together one night once girls were in bed. And then, my guess would be that he thought it was rather cool as well as he “tested” it all out for a bit before putting it aside for morning.

Included in this Rescue City Centre city scape is:

Each area has a turn disk that causes a reaction in that area. Such as “flames” that pop up inside the hotel. The fire truck included has blue water blobs that you shoot to put the fire out. This is probably one of Austin’s favorite features of the city.

The two of them have spent a lot of time playing with (and fighting over) this toy. It has definitely been a huge hit. Besides the fighting that they have been working on there are a few things that the Imaginext toys do promote. Such as:

Curiosity & Discovery
There’s so much to discover in this action-packed city! At the bank, kids can turn a figure left on a disk to open the vault door or turn it right to drop a gate to block the front door!

Imagination & Creativity
Role play skills develop as kids create their own rescue adventures! From protecting the gas station, bank and hotel to manning the fire station, police station and hospital, there’s action around every corner!

How would you like your own Rescue City? Or maybe Mega Apatasaurus? Or Eagle Talon Castle? Or Batcave? How about all of them?!

Imaginext has launched a contest. Contestants are able to play a game, unlocking phases of the game by solving clues, there are nine  clues. Complete it and be entered to win 1 of 5 Imaginext prize packs.

Disclosure: I am part of the Fisher-Price Imaginext Blogger Campaign with Mom Central Canada, and as part of it I received the Rescue City Centre for review, and compensation. This did not in pact my opinions or review of this product(s), my opinions are honest and 100% my own.